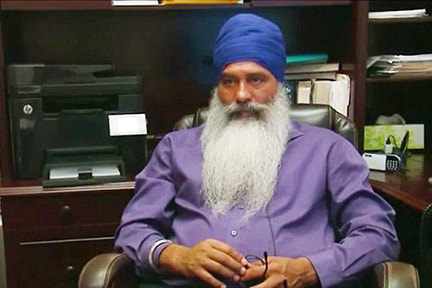 A 64-year-old Sikh man of Indian descent walking in California was stabbed to death at night. According to ABC News, Paramjit Singh was attacked at 9 pm at Tracy’s Gretchen Tally Park, where he died. Detectives said that people passing by saw Singh soaked in blood and immediately called 911 (emergency number). The police have started an investigation into the murder. According to the news, the police could not find any clear clues. He has asked the community members on Monday to identify the person who is seen running out of the park by hanging a fence in a video. This video is about the time of the incident.

Tracy police spokesman Lt. Trevin Freitas said that we have to find out who he is, why they were there. Singh wore a traditional Sikh turban and used to go twice a day. Some locals feared that he was attacked for being a Sikh. Police said they could not comment on its hate crime.
The son-in-law of the deceased Harnek Singh Kang told that Singh had come to Tracy three years ago and was an active member of the Sikh community.

If you are wearing glasses, then change these in food